Nikola Tesla regarded the Earth as one of the plates of a capacitor, the ionosphere forming the other plate. Recent measurements have shown that the voltage gradient between the two is 400,000 volts.

With this principle, he said he was able, through his invention, to provide free energy to anyone, inexhaustible in quantity, anywhere on earth. That is why he had built a first prototype, the Wardenclyffe Tower, in which was to apply his famous pyramid effect. What is it exactly?

"The lines of force of the electric charge additioned to the fields from the sun act on the walls of a pyramid. 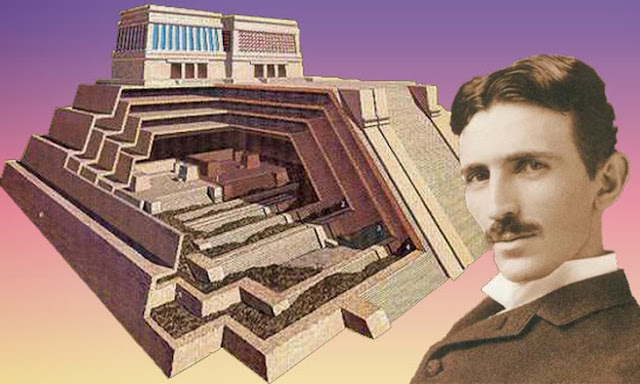 The magnetic equipotentials show a high magnetic density in the summit. The voltage of the electric field increases of 100 V per meter. The terrestrial negative field reaches its maximum value at the summit of the pyramid; at the top of the pyramid of Giza, the voltage is 14,600 V. This pyramid is itself a capacitor, it accumulates an electrical charge. If an excess load is added, a discharge occurs at the top, and, as we know currently, that top was adorned with a solid gold capstone, an excellent conductor."

Tesla wanted his tower to be high to increase the voltage at the top. He wanted to create an artificial lightning in the tower. In the discharge tube of a natural flash , the temperature rises to 30 000 Â° C. Tesla did not want to manage such high temperatures because it is a waste of energy. Tesla's Wardenclyffe tower would have used a transformer to produce a high voltage, which would have generated, instead of a natural lightning, a "discharge of high energetic ion abundance". 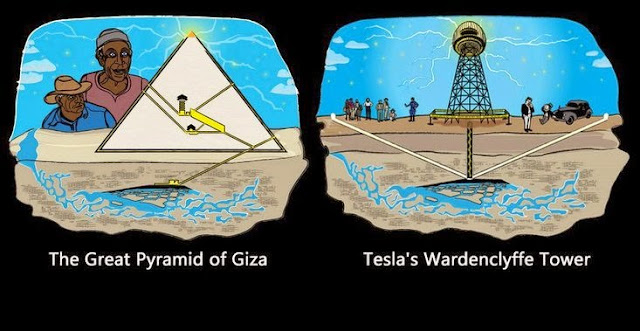 To accentuate the pyramid effect, he had imagined to give the tower the octagonal shape of a pyramid topped by a half sphere. Why octogonal? Tesla does not explain, but when we read his memoirs, we understand that he sensed a scientific discipline that did not yet exist, geobiology, and the theory of waves of forms. From the perspective of traditional physics, the fact that the tower is octagonal is insignificant. It could be square or have an infinite number of faces, that is conic.

"In all cases the voltage would have been the same, its shape just gave it stability."

This raises two objections. The octagonal shape is not a guarantee of stability comparing to the square shape. If he was really looking for stability, a hyperbolic rise, like that of the Eiffel Tower, would have been better suited. The octagonal shape has very special wave characteristics, it is possible that this pure genius sensed it without being able to theorize it.

As for the square shape of the pyramids, the engineer Gustave Eiffel has chosen it for his tower, precisely because it is a guarantee of stability, as the four legs and the widening elevation. Built in 1889, our national tower was already fairly well known to be his model. As Wardenclyffe Tower, the Eiffel Tower has a pyramid effect which makes it pick at the top, even without a storm, a DC current. Its lightning rod "makes" thus some electricity that goes down in a cable to be delivered to the earth.

This waste is not limited to the Eiffel Tower. All roofs and metal frames make the same production, stupidly given to the earth. The Vril energy is free, it is its biggest flaw in a world of profit.

Unfortunately, Tesla was never able to finish his tower. He did not have the opportunity to carry out the planned experiments on Long Island that sought to bring rain in the deserts. Others before him had managed that. We know that Egypt has not always been desertic. The Greek historian Herodotus wrote that "Egypt is a gift of the Nile." But it was in the 5th century BC. Since then, its climate has not changed much, and yet it has not always been so. The predynastic Egypt was rather a gift of the pyramids...

"In the pre-dynastic period, the Egyptian climate is much less arid than it is nowadays. Large areas of Egypt are covered with savanna and traversed by herds of ungulates. The foliage and wildlife then are much more prolific and the Nile region is home to large populations of waterfowl. Hunting is a common activity for the Egyptians and it is also during this period that many animals are domesticated for the first time."

Seeing these merry bands of ungulates, this waterfowl and those hunters never empty-handed, we figure out a very different climate.

And if you go back even further, at a time when, according to Egyptologists, this region of the world was uninhabited, you will discover a startling rainfall. For a millennium, at least, a downpour fell on the Nile Valley. Witness of these continual showers, the Sphinx and its sides deeply marked by rain erosion. According to climatologists, the Sphinx must have more than ten thousand years old, and come from a period of higher rainfall. One can imagine that the great pyramids of Giza date from this period. 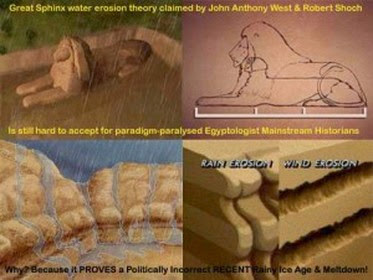 Numerous are the authors who have, trusting the climatologists more than the Egyptologists, still bogged down in a phony chronology, of recent manufacture, and in their turf wars. Of course, the latter refused the thesis of climatologists, however well supported. Never would an archaeologist let the geographers trample his flowerbeds. Continuing to dream like Tesla, one can see how these enormous masses, topped by a conductive gold capstone and coated with gold plates, were used as lightning-catchers by triggering continual storms.

The rain came down to no end on these regions as the pyramids, under the supervision of skilled technicians, continued to function. Gradually, knowledge has been lost, the pyramids were robbed of their precious metal, and Egypt has shifted towards aridity.

Unlike the Wardenclyffe tower, "the function of the pyramids was not at all to produce lightning. Since their construction there are thousands of years, the pyramids function as negative ion generators. In order that they ionize permanently the ambient air, they had to be connected to sources of negative ions. the basement of Giza contains water in abundance. Through a piezoelectric effect, these ions accumulate in the pyramids that then discharged them at their peak.

These pyramids are made of a stone containing crystals that capture the electric charges of underground water."

This is what happened in the Great Pyramid, but lightning was playing part too. As for the piezoelectric effect, if it is perhaps playing a part too, we must not neglect the natural conductivity of the rocks in alternating polarization. in addition, the author of the article cited in reference ignored the discharge bows, whose function is not architectural at all. Egyptologists have not understood their use, however a resorting to the Akashic Records allowed them to give them a perfect name: the discharge bows were electric arcs that actually sent discharges! 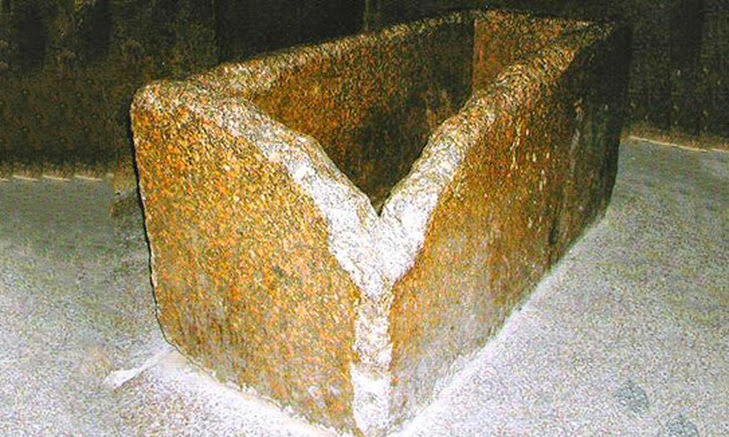 Connected to the top capstone by surfaces and metallic rods, they received the atmospheric energy, accumulated it and emitted "a discharge of high energetic ion abundance" in Isis' Chamber where the candidate to awakening was lying in the stone sarcophagus ...could this be the "trunk of Isis" where "kings" would have received enlightenment?

"The object of life is not to be on the side of the majority but to escape finding oneself in the ranks of the insane." Marcus Aurelius, Roman Emperor and stoic philosopher, 121-180 A.D.
Top

Re: The Pyramid/Tesla Energy Connection

Wow check this out. Praveen Mohan, an ancient mysteries author and researcher, whom Mr S recommended to me, shows in this hands on experiment that indeed pyramid structures do have special powers and energies that other structures don't have. Wow. So this isn't superstition or pseudo-science after all!

Hey guys, today we are going to look at an experiment called 'Pyramid Power'. Do Pyramids have some kind of mysterious powers? All around the world, ancient builders created pyramid-shaped structures in places like Egypt, India, and Mexico, etc. Do they have some unknown effect on our bodies? Some people claim that the Pyramidal structure itself is very special and has some strange powers.

In this experiment, I am going to test, if Pyramid Structures have strange effects or not. So, I have created a Pyramid made of Granite. The base is made of one granite slab and I can lift this whole thing up and you can see that it is hollow inside, just like Egyptian Pyramids.

What is the idea? I am going to cut some fruits and vegetables and put some pieces inside the Pyramid, and I will leave some pieces outside the Pyramid. And I want to find out if there is any difference in how they decompose over a period of time. Just think of the apple as a Human Body, and we can see what happens.

I want to make this experiment as scientific as possible, so, I have also created a granite house. It has windows and a door, but they are all going to be shut closed. It has a granite slab as a base and the top can be removed and closed. Now, what is the need for this granite cube? This is important to determine if the shape of the pyramid has anything to do with the preservation or growth of cells & not the material.

Look at the Pyramid & the House. These 2 objects are made of the exact same material and have almost identical volume of air inside. The only difference is the shape. So if there is a difference in deterioration, we can conclude it is because of the SHAPE of the objects, since the materials, the volume inside and control materials are the same.

While these fruits and vegetables will tell us about how degradation happens in these three settings, it does not show about growth of the body. So, I wanted to study this, and decided to take a few small cups, fill them with soil and put fenugreek seeds inside them. I will put one inside the stone house and one inside the Pyramid, but I will not leave one outside, because if I leave one outside, it will get light, while the other 2 structures are totally dark.

So this is how the entire set up looks today. And this is Day 1. So I am going to come and see how everything looks after 24 hours.

Day 2 - Day 7 - Various stages of decomposition shows if Pyramids have special powers or not!
Check out my FUN video clips in Russia and SE Asia and Female Encounters of the Foreign Kind video series and Full Russia Trip Videos!

"It takes far less effort to find and move to the society that has what you want than it does to try to reconstruct an existing society to match your standards." - Harry Browne
Top
Post Reply
2 posts • Page 1 of 1